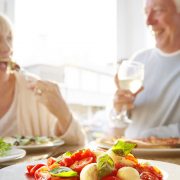 We all have those moments when we forget where we put our glasses, blank on a friend’s name, or discover at the supermarket that we’ve left the shopping list at home.
Such occasional lapses are common, especially once we hit our forties. And while it may be alarming to have a “senior moment” now and then, the good news is that we are not destined to increased memory gaps as we age. Research shows that by keeping your brain healthy with the right diet, and exercising it to keep cognitive function strong, you can boost memory and brainpower. Here are 10 fun, easy things you can do to stay sharp.

Have fish once a week

People who eat fish once a week have a 60% lower risk of developing Alzheimer’s disease, according to research by Martha Clare Morris, ScD, an epidemiologist and associate professor of internal medicine at Rush University Medical Center in Chicago. The reason is DHA, a type of omega-3 fatty acid found in large quantities in the brain and in cold water species of fish, such as salmon, tuna, and cod. Morris recently found that a weekly seafood-based meal may slow cognitive decline by 10% per year—the equivalent of turning back the clock 3 to 4 years. Try these healthy fish recipes to get your omega-3s. Not a fish fan? Take a bite of these other brain-boosting foods.

When it comes to the brain, the one factor we often neglect is mental stimulation. We are creatures of habit and tend to engage in the same activities and behavior patterns. In fact, the brain “prefers” novelty and unexpected events. When we mentally challenge ourselves on a regular basis, we can maintain good intellectual potential as well as reduce our risk for age-related memory loss. Challenge yourself with our brain games, scientifically developed to give your mind a workout. From Mah Jongg to Sudoku, you won’t know which gave is your favorite until you try them all.

If you doubt the power of staying connected, consider this: Experts now believe that socializing, like other forms of mental exercise (such as crossword puzzles), may build cognitive reserve—a reservoir of brain function you draw from if and when other areas of your brain begin to decline. “When you interact with other people, it’s likely that structures in the frontal lobe that are responsible for ‘executive functions’—like planning, decision making, and response control—get fired up,” explains Oscar Ybarra, PhD, associate psychology professor at the University of Michigan. Regular socializing also keeps your brain sharp by reducing cortisol, the destructive stress hormone.

Aside from eating a healthy diet, one of the most important ways to preserve your brain health is through regular exercise. “Cardiovascular activity pumps more oxygen-rich blood to the brain, which is like giving a car a shot of gasoline,” says Thomas Crook, PhD, an expert on cognitive development and memory disorders. With that blood comes nutrients such as glucose, which fuels every cell in the brain. Daily workouts also have long-term benefits. “Cardio exercise strengthens blood vessels and helps prevent illnesses that impair cognitive function, like stroke,” says Crook.

Experts know that positive emotions have a beneficial effect on your ability to process information and are linked to better brain health over the long term. In 2007, one study found that people who frequently experience positive emotions were 60% less likely to develop mild cognitive impairment, while another found that older adults with lower levels of chronic stress scored better on memory tests. If you’ve had a bad day, simply press “eject” on your mental DVD player and pop in a feel-good memory instead, says Crook. Think about a time in your life when you were utterly happy. Rehearse the scene as though you were reliving it, complete with the dialogue, sights, smells, and feelings. “The memory itself will spark brain changes that can help turn your mood—and your long term health—around,” Crook explains. If you’re going through a longer rough patch, take heart—new studies show that depression can actually help your mental and emotional health in the long run.

Don’t sweat what you forget

Know what and when to forget. A daily overload of information often makes us think our memory is declining and we have memory loss when in fact it’s simply glutted with too much useless data. Most of the information that comes at us every day is, frankly, not worth remembering. A fit brain will efficiently screen out and discard worthless or meaningless data so it can remember what’s important. For example, the faster you forget your old PIN or access code, the quicker and more accurately you will recall your new numbers. Can’t concentrate? Try these 10 tricks to reboot your brain.

Go ahead, doze off during your lunch break: Napping for as little as 6 minutes can improve your memory, report German researchers. Over the course of 60 minutes, three groups of volunteers stayed awake for the entire hour, got in just 6 minutes of sleep, or took a 30- to 45-minute nap. On a word recall test afterward, all of those who slept outperformed those who didn’t —but surprisingly, the 6-minute nappers did just as well on the memory exam as those who snoozed longer.